Our tiny wildlife garden, on the outskirts of Shaftesbury, Dorset, featured recently on BBC2 Gardeners' World - and I've had lots of emails asking me about the flowers we planted, in particular for bees. So, I though I'd jot down a list of what we planted to attract pollinators - and also write a little bit about our aims and the underlying structure of the garden in case anyone's interested. If not, just scroll down to the planting list…..

When we moved in earlier this year, there were only three plants growing in the garden; Crocosmia, Hedge Woundwort and Enchanter's Nightshade. There were also a couple of Leylandii, a Hawthorn, a Walnut, an Elder, brambles and loads of Ivy.

The garden is small (approx 5 metres x 6 metres) and mostly paved. It is enclosed by an old red brick South East facing wall and a victorian privy with riled roof, all in poor repair; a North West facing stone wall with crumbling mortar; and larch lap fencing on either side.

When we told the landlord we wanted to turn it into a wildlife garden, he said he was happy for us to do whatever we wanted. So, the first thing we did was cut down the Leylandii!

The other trees proved quite a dilemma. They shade a large part of the garden from early afternoon onwards, which is not so good for bees, but they provide important habitat for birds and other wildlife. So, apart from removing a couple of overhanging branches we decided to leave them as they are. It made the planting more of a challenge, but was the right decision for us.

My partner, Rob, made half a dozen bird boxes from hollowed out tree trunks and reclaimed wood and we attached these to trees and fencing. A pair of blue tits moved in almost straight away, and we also had wrens nesting behind the Ivy, but nothing nested in the sparrow boxes this year. Hopefully they'll find them in 2015! We hung bird feeders on every available branch and on the washing line.

The fact that both the red brick wall and the old stone wall are in disrepair is wonderful. Nothing is more attractive to cavity nesting solitary bees and wasps than the nooks and crannies created within old walls. So all we needed to do with these was leave them well alone! We also build a rockery and piled up old terracotta pots and over miscellaneous items to provide habitat for other insects, small mammals, reptiles and amphibians.

Rob dug a little pond in a semi-shady part of the garden and we now have at least four frogs and one very handsome toad helping us keep the slugs at bay. A number of dragonfly and damselfly species have investigated the pond and we're keeping our fingers crossed that it might eventually be discovered by the local newts.

Other than keeping a few stems for insects to nest in, we removed most of the bramble as it's far too invasive for such a tiny space, but, apart from pruning the lower canopy on the Hawthorn, we have left the Ivy well alone. Ivy truly is amazing! Its flowers provide much needed pollen and nectar, late in the season, for all manner of insects, and its leaves provide excellent cover for birds and other small animals throughout the year.

The only other man-made habitats we have added are Bee Hotels, to attract solitary Mason and Leafcutter bees.

All that is left to add for the purpose of this post is a list of all the flowers we've planted. Most of these have been grown from seeds or cuttings….and some popped up of their own accord….but we also bought a few (thanks to my mother's generosity) from the thursday morning farmer's market in Shaftesbury and also from Brian's fabulous Hill Top Garden at Stour Provost, near Gillingham.

N.B. I've added a * to those flowers that were frequently visited by more than a couple of species of bee and ** to those that have been covered in numerous species throughout their flowering time. It is important to note that the more of each plant you group together, the more likely it is that the bees will find them.

I'm not really a gardener, so some are common names and others latin.

Our planting scheme was planned for continuous flowering throughout the seasons.

Next year we'll be adding the following plants because they are all amazing plants for bees and other pollinators!

The book,  Plants for Bees,  is in my opinion unsurpassed as it is a collaboration between bee experts and gardeners. You can't get a better combination than that.

The website,  The Pollinator Garden , has been compiled over many years by Marc Carlton. It is based on his own experience and I have learned more from this wonderful resource than from any other.

Thank you so much for your interest.

A few photos of some of the visitors we've had this year….. 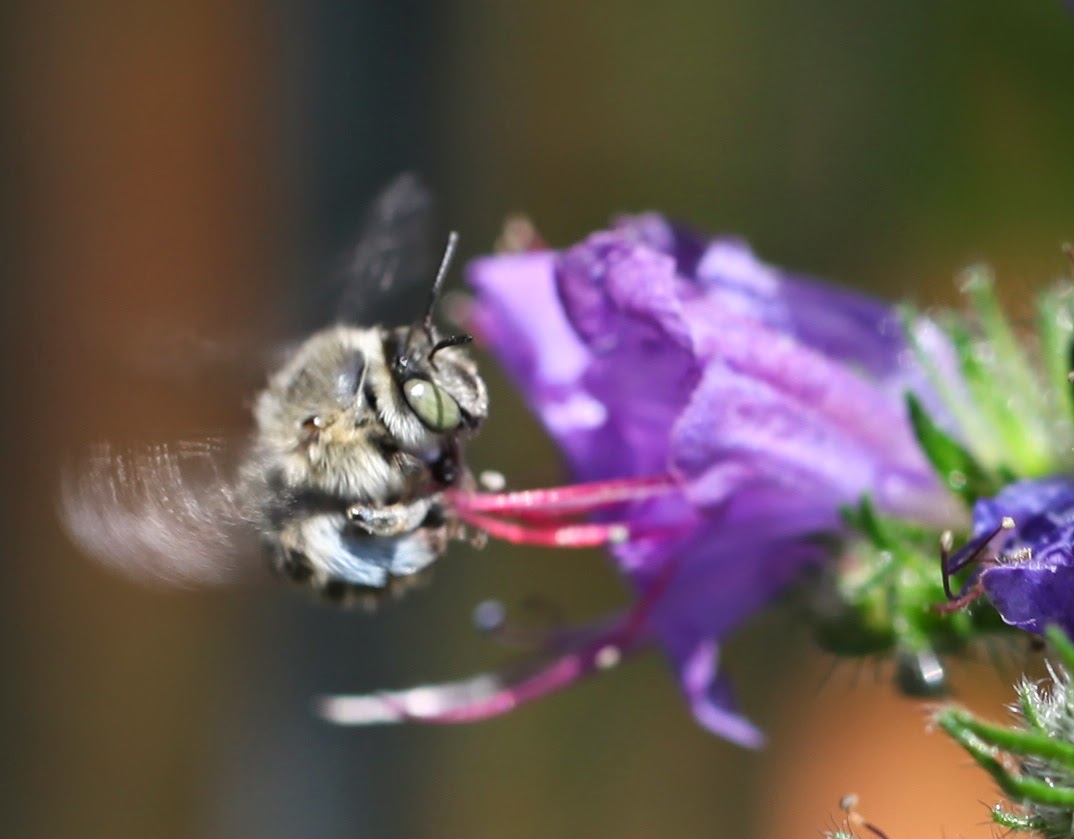