Neonicotinoid Pesticides: Why Have They Still Not Been Banned? 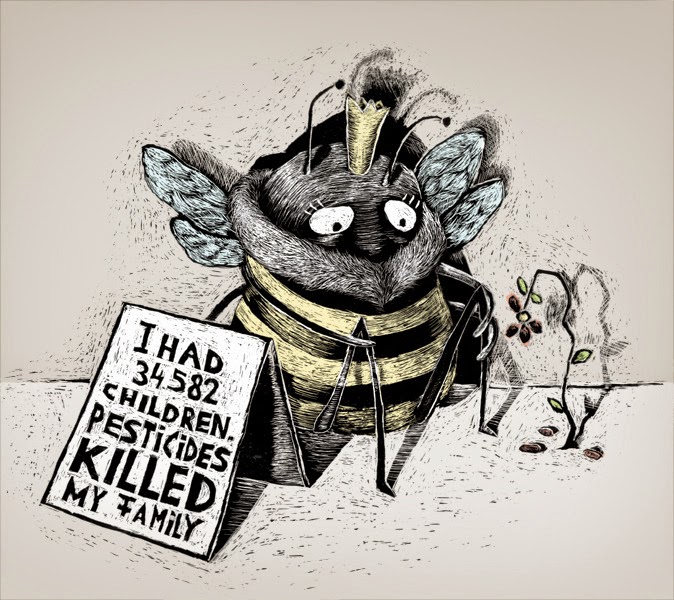 Alongside many other concerned individuals, I have been writing and speaking for years about the damaging and indiscriminate effects neonicotinoid pesticides are having upon bees and other wildlife.

Unfortunately, these systemic neurotoxins are still the world's most widely used pesticide; they are still killing bees; and I am still struggling to understand how the 'Powers That Be' can be so short sighted that they appear to prioritise the short term health of the economy over the long term health of the entire planet's ecosystems.

But weren't neonicotinoids 'banned' by the EU recently?

If I had a penny for every person who's told me they "thought neonicotinoids were banned last year" I'd be a rich woman. In fact they have not been 'banned'. Far from it. In December 2013 the EU Commission 'partially and temporarily restricted' three of them (Imidacloprid, Clothianidin and Thiamethoxam), on crops attractive to honeybees. This restriction - which the UK government voted against by the way - is due to be lifted in December 2015.

In the mean time things are getting worse. Much worse.

At first, it seemed this was all about honeybees, but for a few years now it has been clear that bumblebees and other invertebrates are also being affected. This, in turn, is having a knock-on affect on the small birds, mammals, reptiles and amphibians that rely upon these creatures for their food. We know, too, that neonicotinoids are directly poisoning birds; for instance just a few neoicotinoid coated wheat seeds left lying on the surface of the ground after sowing can prove lethal if ingested by a partridge. Who knows what else is being affected? We were assured by the companies who manufacture these pesticides, when they first appeared on the market back in the 1990's, that they were (are) safe for bees, much in the same way as we were told back in the 1960's that DDT was safe for humans…..

I fully appreciate that raising awareness of the dangers of using neonicotinoids is provoking a backlash from those who believe there is no alternative, but as Dutch toxicologist Henk Tennekes﻿ points out in his book of the same title, their ongoing use truly is 'A Disaster in the Making' . We cannot afford to become complacent about this issue; especially when, contrary to what the manufacturers tell us, there is growing evidence that much of their use is unnecessary and ineffective.  If people were to stop campaigning and/or speaking out for fear of being shot down when they dare to put their heads above the parapet, then the unprecedented ecological damage resulting from (in this case) the use of neonicotinoids, would quickly become yesterday's news and we would reach a tipping point where there would be no going back.

Life on planet Earth is underpinned by invertebrates and other small creatures that are now being destroyed in their billions by neonicotinoids and other pesticides, so, to my mind, this issue is as important and pressing as any other current environmental issue. We humans play with too many fires and, painful though it might seem to those who believe our crops will all fail if seeds and plants are not treated with neonicotinoid pesticides, this is surely one fire that needs to be put out before it engulfs us all.

I am neither a scientist nor am I a farmer. I am just a person, like many others, who cares enormously about the plants and animals we share this planet with. Having followed this issue since the media first started reporting on honeybee CCD (Colony Collapse Disorder) and having read numerous scientific reports whose findings are, quite frankly, terrifying, my instincts and common sense scream out to me that the continued and indiscriminate poisoning of our invertebrates, not to mention the air, water and soil we rely upon to sustain life itself, is extremely dangerous and horribly, horribly wrong. So again, I suggest we simply cannot afford to be complacent about neoicotinoid pesticides - nor can we keep relying on a few individuals and organisations to sort this out for us. I don't know what the answer is, but I'm sure that burying our heads in the sand is not it. We need to consider ways of growing our crops without the prophylactic use of neonicotinoid pesticides, and search for more sustainable ways to feed the world. Perhaps an increase in small scale organic farming for one? Whatever the solution, the problem needs to be owned and addressed by us all; scientists, growers, governments and consumers alike. Urgently.

My final thoughts are that it's all very well people making a big noise, as they have recently, about the possibility of OSR crops failing if neonicotinoids are banned, but surely the alternative, i.e. there being no pollinators left to pollinate them anyway, doesn't bear thinking about?

N.B. Neonicotinoids and other pesticides are not the sole cause of declining biodiversity. Habitat loss is every bit as important an issue.  Both need to be tackled simultaneously to reverse the decline.

The following links provide more in-depth information from scientists whose research and understanding of this issue is far more informed and in-depth than mine.  Do please read what these scientists have to say. I have chosen these links carefully for their readability.

If you buy just one book this year, please make it  Dave Goulson's 'A Buzz in the Meadow'

If you sign up to just one charity, please make it BUGLIFE