When is a bee not a bee? 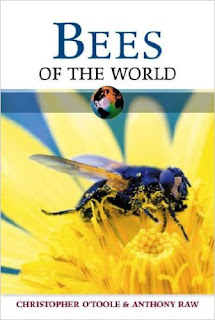 If you were to read an article about lions, but the photograph accompanying it was one of a tiger, you would probably notice straight away.... and you'd be surprised. But would you notice if an article about bees were accompanied by a photograph of a hoverfly? Possibly not. However, the internet is awash with wonderful, well researched, articles about bees that have been illustrated with photographs of hoverflies. In fact it's not just internet articles that get this wrong; one of the best reference books on the world's native bee species sports an image of a hoverfly on its front cover. Christopher O'toole and Anthony Raw must have been dismayed when the first edition of their wonderfully informative book hit the book shops in this guise!

So why do certain hoverfly species manage to dupe us into thinking they are bees.... and how can you tell the difference between a bee and a hoverfly?

A few years back, I spotted something that looked like a bumblebee and flew like a bumblebee, foraging on the flowers just outside my kitchen window. There was something unusual about it that I couldn't quite put my finger on, so I took a quick snap shot and uploaded it to my laptop for a closer look.

Lo and behold, it wasn't a bumblebee at all! Although it had been difficult to tell from a distance, I could see straight away from the image on my laptop that this insect had large prominent 'fly' eyes that almost joined together in the middle of her head and that her antennae were short and stumpy; entirely unlike a bumblebee who would have ovoid eyes on the side of her head and whose antennae would be long and beautifully elegant. On further examination I noticed she was missing the 'waspish' waist that characterises all bee species and I could also see that she only had one set of wings, rather than two.


I was most surprised. For all the world this creature had looked and acted like a Red tailed bumblebee (Bombus lapidarius) but clearly she wasn't. She turned out to be Merodon equestris (Narcissus fly) one of our 250 or so UK hoverflies. A fly pretending to be a bee…..

'Batesian mimicry' is where a harmless species has evolved to mimic the warning signals given out by a harmful species. One of the most obvious examples of this form of mimicry is where hoverflies imitate wasp coloration in an attempt to avoid predation by birds and other predators. My understanding previously however, had been that whilst bees 'flew' - hoverflies 'hovered. Not so this hoverfly! Merodon equestris has taken Batesian mimicry to its extremes. Not only does it look like a bumblebee with its long hair and chunky striped markings, but it has actually evolved in such a way that it flies and buzzes like a bumblebee too….. although of course there are differences once you know what to look for. Incredible.

To discover more about our wonderful and diverse UK hoverfly species, please check out All About Hoverflies. It contains loads of interesting information and lots of great photos and illustrations to help you identify the hoverflies visiting your garden…..

If you are interested in learning more about insects in general….or in helping prevent their decline  …..do please consider joining BUGLIFE . For as little as £2 per month you can help this charity make a real difference.

Edited to say: I have since discovered that the insect on the front of 'Bees of the World' is NOT actually a hoverfly, but another type of fly! So I, too, am as guilty of mixing up my flies and my hoverflies as some newspaper editors are of mixing up their bees and their hoverflies or flies...