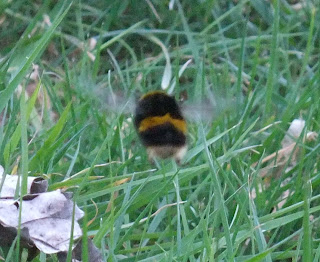 This is such  an exciting time of year! The signs and sounds that herald the arrival of spring are all around us. Winter bulbs are beginning to flower, buds are tentatively coming into leaf and the birds are singing their little hearts out. The anticipation of warmer days to come is almost tangible.

Nothing excites me more though, than seeing my first queen bumblebee of the year.  Although there are one or two species (most notably Bombus terrestris) that occasionally continue to raise broods over the winter, for the most part our 26 species of UK bumblebees have been hibernating deep beneath the soil since last Autumn.
With bumblebees, it is only the (already fertilized) queens produced towards the end of the colony's lifecycle that hibernate beneath the ground and survive the winter. Apart from the odd overwintering B. terrestris colony, last year's males, and all the female workers, will have died out long before winter set in.  So, if you see an ENORMOUS bumblebee on the wing at this time of year, she will be one of the new queens that have just emerged from hibernation. 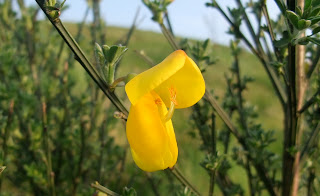 The first bees to emerge from hibernation are usually Bombus terrestris (commonly known as the buff tailed bumblebee) followed closely by the much smaller B. Pratorum (early nesting bumblebee), B. hypnorum (tree bumblebee) and B. lucorum (white tailed bumblebee)

The newly emerged queen will forage for nectar to build up her strength after her long winter's sleep... and for pollen to develop her ovaries.  Hopefully she will have chosen a hibernation site near an area with a plentiful supply of winter flowering heathers, gorse (right), crocus, dead nettles and pussy willow. However, if the sun has tricked her into emerging too early and there is nothing for her to feed upon she will starve. So these and other early flowering plants are literally life savers for our early rising pollinators. Other early spring favourites include hellebores, white dead nettle, snowdrops, green alkonet and lungwort.

Prospecting for a nest 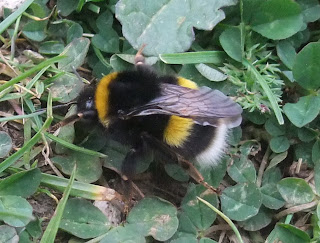 Once she has replenished herself with nectar and pollen, the queen bumblebee's behaviour changes. She now begins to fly in a zigzag pattern, just above to the ground (especially where there are piles of dead leaves and rotten wood) as she prospects for a suitable site to build her nest. A bumblebee's preferred choice for a nest would be a vacated mouse, shrew or vole nest....but with the demise of our hedgerows and woodland edges, these are becoming harder and harder to find. Other preferences (depending on the species) include tussoky grass, compost heaps, crevices beneath stone walls and bird boxes. Those that are fortunate enough to find a suitable nest must be prepared to defend it from other bumblebees, as competition for suitable nesting sites is high.

I don't know for sure, but I imagine that one of the contributing factors to the success of B. terrestris whilst many other species are in decline, could be that it steals a few weeks on other species in the 'nest hunting' race - thereby managing to establish its colony before some of the later species begin to emerge. I should add here that the main reason B. terrestris is one of our more common species is that, together with the others known as the 'big eight', she is a 'generalist' rather than a 'specialist' when it comes to foraging. This means she is not a fussy eater, so doesn't rely on just a few types of flower, or habitats, for her survival.

So, let us assume that our overwintering bumblebee has successfully found a plentiful supply of pollen and nectar rich flowers, stumbled upon a vacant small rodent's nest (or something else reasonably suitable such as a compost heap, a dry warm hole underneath a garden shed or the pocket of an old coat) and managed to avoid the myriad not-so-mutually-beneficial parasites that often 'do for her' before she can arrive at this stage. She is now ready to establish her colony. This stage will have been reached, depending on the species of bumblebee, at any time between early spring and early summer.

You will know when a queen bumblebee has reached this next stage, because her behaviour will change again. Instead of zigzagging across the ground she will now begin to fly backwards and forwards from her nest with great purpose... and the pollen baskets (corbicular) on her her hind legs will be absolutely laden with pollen. This suggests she has established her nest.

Inside her nest, the queen will have fashioned a little wax pot - around the size of a small fingernail - which she will have filled with nectar to feed herself so she can keep up her energy levels should she have to remain in the nest during inclement weather. She will have removed any debris from the site and waterproofed it to the best of her ability. Then, once the nest is ready, she will mix together some pollen, nectar and saliva to form a little ball into which she lays half a dozen or so eggs. From now until the time her first brood of workers emerge, her time will be divided between 'brooding' and nipping out to forage. 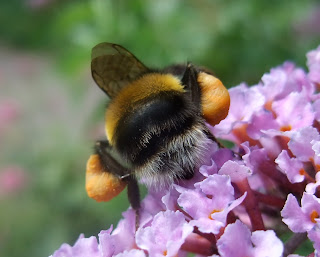 Bumblebees 'brood' much like birds, in that they sit on their eggs and keep the temperature at around 30°C . They do this by disconnecting the flight muscles inside their thorax and shivering their muscles.

Unlike birds, however, bumblebees are single parents, so they need to keep their foraging trips short and sharp in order that the temperature in the nest doesn't drop too much. Once she has laid her first batch of eggs the bumblebee queen will always face the entrance of the nest so she is ready to ward off any unwelcome intruders. Her little nectar pot will be close enough so she can easily dip her proboscis (tongue) into it, to sup the nectar she has previously collected, whilst she is brooding.


After the eggs hatch (a couple of days after they have been laid) the developing larvae feed upon the pollen provisions and go through various growth stages before spinning cocoons around themselves and pupating. After two weeks in their cocoons they will emerge as fully grown adult bees. The first few broods are alway female 'worker' bees. They are usually much smaller than the queen and will take on the roles of nurse maids, cleaners, guards and foragers.

From this time onwards the queen bumblebee is unlikely to leave the nest.

Just a quick note before I sign off about the impact that 'habitat loss' is having upon bumblebees and other pollinators....

Over the last seventy years we have lost 98% of our once rich and diverse grasslands and wildflowers, as well as small woodlands and hedgerows. This has caused greater knock-on effects than many people realise.

The disappearance of these wonderful habitats has drastically reduced the diversity of flowers that used to provide such an excellent source of pollen and nectar for some of our now rarer bees. It has also resulted in loss of habitat for many of our small mammals. Fewer small mammals obviously means fewer small mammal burrows... which in turn leads to fewer suitable nesting sites for bumblebees. From a human-centric point of view, the decline in the bumblebee population impacts very seriously on our food supply. Not only are bumblebees the main pollinators our legume crops, but they are also the only insects that are able to pollinate crops such as tomatoes, aubergines and blueberries.

We would do well to spend a little time thinking about the knock-on effects and consequences of our actions before we tamper with Mother nature!

Anyway, that's enough for now; I've jumped way ahead of myself considering it's so early in the season - and it is bot my intention to write a blog about the complete life cycle of the bumblebee.

I'll write more as, and when, this year's nests become established, but if you can't wait and want to know more now, there are links below to two wonderful sites containing loads of information about all things 'bumble'......

Have a beautiful sunshine filled day and thank you for reading this blog post.

P.S.....I do talks about bees and am taking bookings for 2016 and 2017 so I can continue raising awareness of the importance of these incredible creatures, the reasons for their decline and what we can all do to help.

Please look at my talks page for more details http://www.beestrawbridge.blogspot.co.uk/p/talks.html

For more information about bumblebees please have a look at the following sites...