Bees: where to begin? 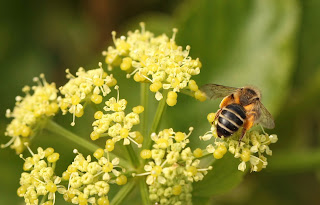 A few more passages from the opening chapter of the book I'm writing....

Given the enormity of our reliance upon bees as pollinators of human food crops, it beggars belief that we (by we, I mean you and I; not the scientists who study insects) know so little about them. Mention the word bee to most people, and images of bee hives, beekeepers and honey are the most likely things that will spring to their minds. However if I were to give the same people a sheet of paper and some coloured pencils and ask them to draw me a bee, most of them would draw something shaped a little like a rugby ball with striped yellow, white and black bands to which they might attach a head, six legs, two antennae and a pair (or two) of wings; something that looks, essentially, like a bumblebee.

So there is clearly a little confusion as to what, exactly, a bee is.

In actual fact, Planet Earth is home to at least 20,000 different species of bee. This is quite a staggering figure; one which surprises most people when they first hear it, especially if they have previously only been aware of the existence of honeybees and bumblebees.  Of all these different species, only 7 are honeybees, around 250 bumblebees and the rest are solitary bees. (N.B. of the so called 'solitary' bees, some groups actually have social structures. I have not yet fully understood the varying degrees of sociality amongst these groups; it's a complex subject and one I'm still trying to get my head around)

Bees are incredible in so many ways, that I will barely manage to scratch the surface of their existence in this book. My aim is simply to introduce you to certain aspects of their world; a world which, for the last decade or so, has filled me with ever increasing wonder and joy as I have immersed myself in watching, listening and tuning in to the bees (and other wild creatures) that I come across in my garden and on my travels around the UK. By sharing the knowledge I have gained, together with my observations, understandings and realisations, I hope to inspire you, too, to fall in love with these extraordinary little beings… or at least to see them in a different light and want to find out more about them.

Most of us are aware that bees are important pollinators, but far from being in awe of the fact that something so tiny is capable of achieving something so extraordinary i.e. pollination.... we tend instead to take this gift (or service as it is so sadly referred to these days by economists) very much for granted. I use the word ‘gift’ with consideration and awareness of the fact that a gift is usually something that has been given with intent to a recipient. As bees and other pollinators go about their daily business of foraging for pollen, their aim is of course to collect as much as possible to take back to their nest to feed, or provide for, the next generation of their species. Bees are no more setting out to ‘gift’ us their services than they are setting out to ‘pollinate’ the plants they visit, but the result, in my eyes, is one of the most wonderful gifts that nature bestows upon mankind, and one without which we simply would not survive.....


So, ‘Bees pollinate flowering plants’. This we know. But how exactly do they achieve this? How does a bee, newly emerged from its brood cell or cocoon, recognise that plants provide it with food, or which flowers contain the best sources of pollen and nectar? Which bees (or which other species of pollinating animal for that matter) pollinate which plants? How do they know which flowers have already been worked and which still contain rewards? How do they access the more complexly structured flowers? How do they extract pollen and nectar? How does the plant make sure that pollination actually takes place? How do bees carry pollen back to their nests? How do they find the same plant again? How do they communicate (do they communicate?) this information to other bees? How do they use the pollen……? So many hows?!