A (bee) story with a happy ending 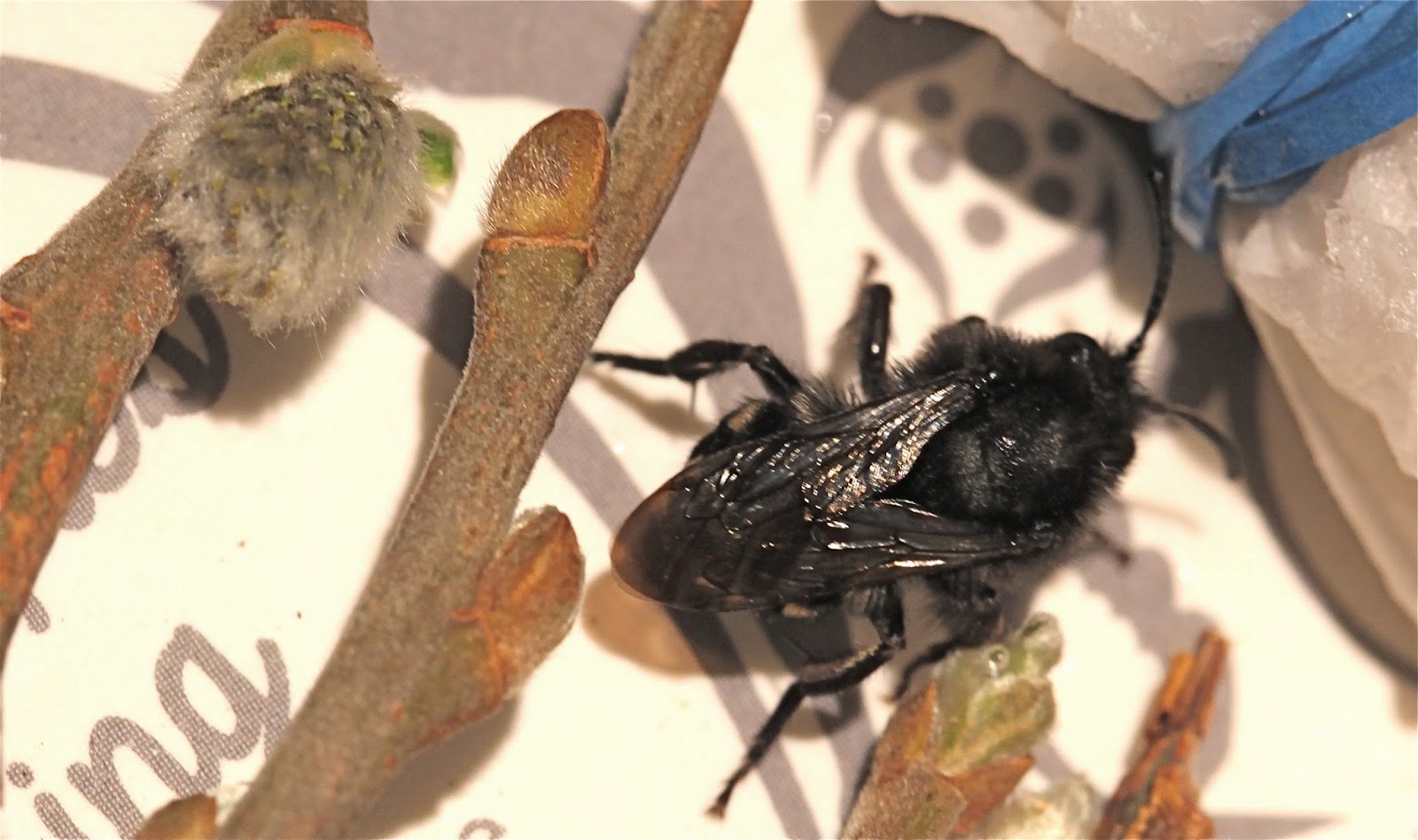 Last year my very lovely friend, Sally, told me about some hibernating bees her sister had found in a wall she had knocked down. Her sister had wrapped the bees gently in some kitchen roll and put them in a box. Sally collected them a little while later and gave them to me to look after. I had a pretty good idea from the description that they would be Hairy Footed Flower bees (Anthophora plumipes)
As the box had been in a car for 24 hours on a warm, sunny winter's day, I thought I'd better check to make sure the bees hadn't woken up early. When I peeked in the box I could see they had indeed been Hairy Footed Flower bees, but they had not survived the wall being knocked down. The box contained lots of old mortar, and dust, and dead Flower bees.
However, just as I was about to give up on them, I noticed a tiny movement. Something was still alive! I looked closely and saw that it wasn't one of the Hairy Footed Flower bees, but was in fact a bee that goes by the name 'Melecta albifrons'; a very striking black bee with silver/white spots on the sides of its abdomen.
Melecta albifrons is a solitary 'cuckoo' bee. The adult females sneak into the host bee's nest (in this case the Hairy Footed Flower bee) and lay their eggs alongside the Flower bee's eggs. Melecta albifrons eggs hatch first, and the larvae eat the pollen that has been carefully stored for the Flower bee larvae by their mother….a fiendishly clever way of making sure your offspring get food and develop into new adult bees without you having to do any work whatsoever!
The problem was that my bee had woken up in January…a good 3 months before it was supposed to wake up….so I didn't hold out much hope that it would survive.
Anyway, to cut an even longer story shorter, I have been keeping this bee in a dark cool place since January, in the hope that it would go back to sleep and not wake up again till others of its kind were on the wing. That would be about now…..for, as Hairy Footed Flower bees are out in force, it means their cuckoo bee, Melecta albifrons will also be starting to emerge.
My plan was to open up the box next week to see if it had survived, but, amazingly, my little bee somehow found its way out of its box in our cool dark cloakroom... and into our kitchen….where I have just found it crawling around the top of the cooker looking for something to eat.
I've caught it now and put it in a little cardboard box with some pussy willow and sugar syrup, which it is lapping up after its long winter sleep. Tomorrow I will take it to the 'Bee Wall' at the bottom of Stony Path in Shaftesbury, where I know it will find others of its kind.


It has been a very lucky bee.

Today we took the bee to the 'Bee Wall'; an old stone wall in Shaftesbury that has been home, for many years, to quite a few different cavity nesting solitary bee species. The Hairy Footed Flower bee males were out in force, buzzing around the wall in search of emerging females. We opened the little box we had been keeping him in (I say 'he' but it could easily be 'she') and he flew out immediately. He spent a few moments buzzing around the bee wall before flying up over the roof and out of sight.