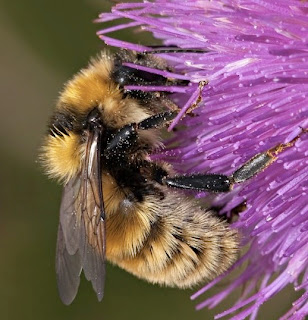 We have lost 98% of our UK wild flower meadows and unimproved grasslands in the last 70 years.

The decline began with the mechanisation of agriculture back in the 1940s, was compounded by the introduction of herbicides in the 1960s and spiralled out of control when farmers were given  common market grants in the 1970s to grub out hedges... drain marshy areas... fill in ponds... and plough and re-seed pasture with new fast growing grasses and monocrops.

Our landscape has changed beyond recognition - and the impact this has had upon our once rich diversity of flora and fauna cannot be understated.

These changes in our native wild flora have caused declines in many species and populations of farmland birds, small mammals, amphibians and invertebrates - but have been especially devastating for some of our specialist long tongued bumblebees such as the Great Yellow Bumblebee, Bombus distinguendus, and the Short Haired Bumblebee, B. subterraneus.

Most of our long tongued species of bumblebee have a preference for the wildflowers that thrived in the hay meadows of yesteryear - and for the leguminous crops (in particular red clover) that were grown in crop rotations in days gone by. Unfortunately, the flowering plants that used to provide these bees with their main source of nectar seem to have suffered disproportionate declines over the last 70 years compared to other flowering plants.

There are, of course, months of the year during which oilseed rape and other flowering monocrops provide for the needs of bees and other pollinators, but these are of no use to bumblebee queens when they emerge from hibernation to establish new colonies in the spring - or when their colonies are producing new daughter queens in late summer/early autumn. Lack of suitable flowers to forage at these times can lead quickly to the death of the entire colony. A bumblebee colony will only thrive and succeed in producing new queens if there is a continuous succession of suitable flowering plants from spring through to autumn.

The lack of abundance of wild flowers with long corollas has resulted in many of our grassland bumblebees becoming rare, endangered or extinct. Fewer long tongued bumblebees leads to a reduced pollination service for our surviving wild flowers. This, in turn, leads to fewer flowers to feed the remaining populations of long tongued bumblebees. This feedback process is known as 'extinction vortex'. Given the fact that bees are 'keystone species', the knock on effect this process could have upon other species of flora and fauna doesn't bear thinking about.

There are still some fragmented pockets of meadow and unimproved grassland left in the UK, but these are like islands amidst a sea of monoculture farmland and urban sprawl. It is of paramount importance that more corridors of nectar and protein rich wildflowers are created to link these habitats, so that the endangered bumblebee populations nesting within them (not to mention the many other creatures that have become marooned in these wonderful, but isolated wildlife havens) are not so vulnerable to the effects of inbreeding or other external causes of decline such as pesticides.

The Co-operative are addressing this need for wildlife corridors in their pilot project Bee Roads which is creating five hectares of food-rich main routes for pollinators in Yorkshire - and the Welsh Government have, this year, announced a Pollinator Action Plan. However, these projects will take time to establish the clock is already ticking for some of our rarer bumblebees.

There are also a number of incentives in existence at the moment, including various levels of Environmental Stewardship which encourage farmers and land owners to manage their land in a more environmentally and wildlife friendly way. However, just as these schemes are celebrating their 25th anniversary, it is feared that EU cuts could slash the budget for UK wildlife conservation which would be a disaster for many of the species that depend on these schemes for their very survival. 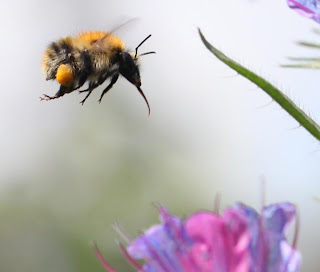 Is there anything that can we do to help? The answer is emphatically yes!

There are over one million acres of private garden in the UK and these could potentially provide bees (and other wildlife) with the corridors they so desperately need to move around between larger areas of suitable habitat.

To create these much needed corridors, all we need to do is plant suitable flowers.

I'm not going to make a list of 'what to plant' as there are plenty of websites and books (links below) that already give far better advice and information on planting than I could offer. The one suggestion I will make though is that if you have a lawn, perhaps you might consider allowing it to grow a little longer before you mow it!  Just a few extra inches will allow clovers, vetches, trefoils, selfheal and other low growing nectar and pollen rich flowers to grow and bloom.

One last thing. Please contact your local authorities and ask them to stop filling the hanging baskets and roundabouts in our towns and cities with bedding plants! Bedding plants are no good to man nor pollinator. Far better to plant something like lavender which needs less watering, smells divine and provides much needed food for bees.

Where to buy your seeds and plants......

RSPB Gardening for Wildlife
Plants For Bees
Where Have all the Flowers Gone?

P.S. To end on a positive note; most of the shorter tongued bumblebees, and two of the longer tongued species (the Garden Bumblebee, B. hortorum and the Common Carder Bumblebee, B. pascuorum) seem to have adapted very well to the flowers we grow in our gardens, so are currently in less trouble. These bees are 'generalists' and are equally happy foraging on wildflowers, garden flowers or exotic non-native flowers.

Thank you for reading to the end.