YOU CAN MAKE A DIFFERENCE.... 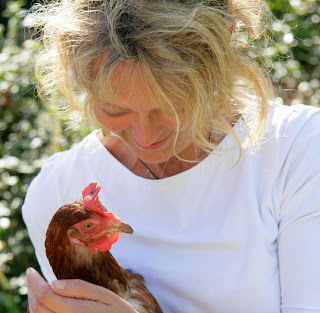 Nearly thirty years ago, whilst driving home from visiting friends in Oxfordshire, I noticed a huge articulated lorry parked at the side of the road alongside a dozen or so long, flat, sinister looking buildings, at the edge of what looked like a 'farm'. It was a very hot day so my windows were open and I remember being quite overwhelmed by a smell unlike anything I had noticed before in the open countryside.  My curiosity was further raised when I became aware that the lorry was packed high with slatted boxes containing something making a lot of noise.

The lorry engine was running but as there was no sign of the driver, I pulled up and got out of the car to have a look. I was absolutely shocked when I realised that the boxes contained thousands of creatures that I knew to be chickens, but which didn't look like any 'chickens' I'd ever seen before.

The image that remains ingrained in my memory is one of thousands of poor, sorry looking hens looking like they had already been plucked ready for someone to cook. Their combs were as pale as their white, featherless skins and many of them were covered in growths and open sores.

Whilst I was still standing looking at them the lorry driver came out of the 'farm' so I asked him what was wrong with the chickens (I assumed they must have some kind of disease to be looking the way they did). "Nowt wrong with them" he replied. "other than the fact that they're past their best. They're off to be slaughtered now."

Still in shock, and unable to get my head around what I was seeing and hearing, I asked a few more questions to try and get a grasp of the situation. I soon came to understand that these chickens were what we refer to as 'ex-battery hens' and that having spent a year living in cramped, dark conditions, laying eggs for the Great British Public, they had now been written off as 'unviable' and packed into these crates to be picked up and taken away to be slaughtered.

I had a cardboard box in the boot of my car so I asked the lorry driver if I could take some of the hens home with me. He agreed that, so long as I didn't tell anyone where I'd got them from, I could take three. 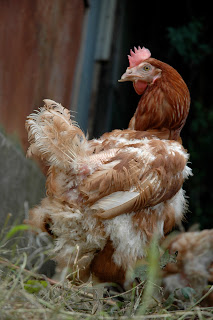 This was my first experience of rescuing ex-battery hens...but it certainly wasn't my last. The pleasure our family had from watching Felicity, Flora and Freda (these were the names we gave our first three girls) blossom into fully feathered hens - each with her own personality - was immeasurable. They soon learned how to flap their wings, scratch in the grass for food and dig dust baths to cleanse themselves...and they came running to the back door every time it was opened o the off chance that there might be some left over cake, bread, or, best of all, spaghetti! The thing that always grips me most about ex-battery hens though, is that after having suffered so horribly at the hands of other human beings, they are still completely and utterly trusting of whoever rescues them. Extraordinary creatures!

I've lost count now of how many ex-batts our family rescued over the years....and therein lies a big problem. In thirty years you'd have thought things might have changed - it's not as though there haven't been countless awareness raising campaigns - but sadly, the miserable conditions that these and other factory farmed animals are reared in have barely improved at all. Shame on us.

I am in awe of the fact that my reason for writing this blog, nearly thirty years after having rescued those first three ex-battery hens, is that millions of hens in the EU still live in cages.

We are told that conditions are improving....and that new legislation that came into effect on 1st January 2012 should ensure better welfare in the EU for battery hens. However, the issue is far more complex than it first appears...

Ignoring the fact that these 'improved' conditions are nowhere NEAR adequate for the basic needs of a living creature...there is also a danger that the costs of implementing the changes will be so huge that farmers in the EU who have made the switch to 'enriched' cages are now likely to have their eggs out-priced by eggs from countries outside the EU where the conditions hens are kept in are, heaven forbid, even worse. Bizzarely, there is going to be very little in the way of 'enforcement' from the powers-that-be to stop this from happening (link to government document explaining why they can't enforce this below)

So what can we do to help?

Well, first of all, and most urgently, you could rescue some ex-battery hens.  If you think you can re-home a few hens PLEASE contact the 'BRITISH HEN WELFARE TRUST' - link below

The other thing you can do is to buy eggs only if you are absolutely sure that they have come from organic free-range flocks. This will cost you more, but it is the right thing to do and is the only way we can send a clear message out to supermarkets, producers and governments that we will not tolerate current animal welfare standards.

If you have no space to house hens, perhaps you could make a donation to the 'Battery Hen Welfare Trust' or 'Compassion in World Farming'.....

One last thing. I know times are tough and that most of us are feeling the pinch, but if you are still able to afford the odd bottle of wine, or beer, with your meal - then you are able to afford to spend a few more pennies buying meat, eggs and dairy from a source where higher welfare standards have been met.

IF YOU KNOW ANYONE WHO COULD GIVE SOME EX BATTERY HENS A HOME PLEASE CONTACT THE  BRITISH HEN WELFARE TRUST  FOR FURTHER INFORMATION......


What our government are doing to stop the import of eggs from dubious origins outside the EU (not much) - http://www.parliament.uk/documents/commons-vote-office/8-DEFRA-EU-ban-on-keeping-of-hens-in-conventional-cages.pdf

The Life of a Battery Hen - http://www.viddler.com/explore/euthanasiabrigade/videos/2/

Compassion in World Farming charity - http://www.ciwf.org.uk/
Posted by brigit at 10:31