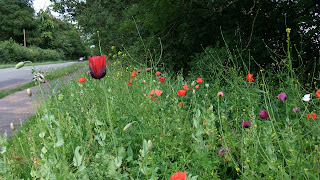 I wrote a few months ago about how frustrated I get whenever I see beautiful, wildlife rich habitats being strimmed indiscriminately by local councils  http://bit.ly/pBP1nU  and I've been doing a little research since then to see what I can find out about strimming & mowing policies for roadside verges, parks, open spaces etc.

I fully understand that certain roadside verges on major trunk roads need to be kept short(ish) for traffic safety reasons. Elsewhere however, and especially in areas where the reasons for cutting them are purely 'aesthetic' (often because members of the public have complained about an area looking 'untidy'),  I feel I must speak out against what I believe results in a short sighted and unnecessary loss of biodiversity.

However, there's absolutely no point in me banging on about "how awful it is that our beautiful native wildflowers are being chopped down before they've had a chance to set seed" - or stamping my feet in frustration about "the knock on effect that this is having on our already endangered pollinators" - if I'm just ranting in an internet blog rather than speaking to the people who can actually effect change (i.e. the policy makers) and making an effort to understand where they're coming from.

When I first started looking into this I naively thought there might be a single person or department responsible for all the verges and open spaces in any one county. I hoped there might be a 'policy' somewhere which, in light of all the evidence pointing to loss of habitat being a major factor in the decline in bee numbers, could be rewritten.  This, of course, is not the case. In fact the issue is far more complicated than I ever imagined.

'Who' is responsible for 'what'?


After a little digging and delving on the internet and a few fruitless telephone calls to various council 'hubs' - "Sorry madam, we can't give out the work numbers of council employees because members of the public might try to contact them"!!! - I finally managed to speak with a lovely 'Biodiversity Action Plan Manager' who helped me understand a little more about the way the system works. So, I feel I'm a little closer now to understanding 'who' is responsible for 'what' when it comes to the UKs verges - and other open spaces.  Please don't take my word on what I have written below though, because it all seems to vary so much from county to county and what I've learned is only based upon a very limited amount of research.

I'll start with the major motorway and trunk roads because they seem fairly straight forward. These are the responsibility The Highways Agency whose maintenance policies are set out here - http://bit.ly/q1coI8   . The 'management' of these roads is sometimes contracted out to the County Councils whose counties they run through.

Once you move away from the major trunk roads, to the 'A' roads, the responsibility for maintenance falls to the County, City or Local Authority in which that road is located. Here's a random example of how this works which explains the system far better than I can  http://bit.ly/p6jm8a


As well as roadside verges there are also 'parks and open spaces'. The authorities responsible for these areas (which include spaces as diverse as sports pitches, ponds, parks, cemeteries and play areas - to the hanging baskets and floral displays you see in town and city centres) could be either District Councils, Parish Councils or Housing Associations.

Here's an example of 'who' is responsible for 'what' in Tower Hamlets (I found it useful to read examples of how different authorities operate at different levels so hope you will too) - http://bit.ly/p661y3

Hope I haven't lost you yet! Please hang on in there.....


As you can see, it's already quite difficult to get to the bottom of whose responsibility it actually is to decide on the grass cutting policies for any given space; but it gets even more challenging now.  Once the policy has been decided (i.e. how often/ how short etc)  the job of actually 'managing' the grass (or hedge) cutting is then contracted out to local farmers, garden centres, landscape gardeners or any other body or individual who possesses the equipment (truck, tractor, strimmer, mower, scythe (?!) .....) to do the job.

These contracts are agreed/renewed every 3 - 5 years so you can imagine how difficult it is at any given moment in time to find out exactly 'who' is cutting 'what', 'when' and 'where'. The logistics of introducing and implementing new policies don't bear thinking about!

'Where have all the flowers gone?


I have wonderful childhood memories of my father taking me and my brothers for walks on Sunday afternoons in the '60s. We moved house quite often, so our walks covered many different areas of the UK, but the one that sticks out in my mind most visually is the one that ended with us walking back along a bit of the main road from Oxford to Swindon, where we stopped to pick wild flowers for my mother just before we turned back into the road where we lived.

I don't think wild flowers were protected by law back in the early 60's and it certainly didn't occur to me as a child that I was picking anything rare or endangered. There was an absolute abundance of flowers and grasses; nowhere more so than on roadside verges. We would return home from our walks with bunches of flowers and grasses in every imaginable colour for my mother to put in little vases or empty jam jars.

That was nearly fifty years ago and our landscape has since changed quite drastically. The majority of our roadside verges are now wildlife deserts; devoid of flora and fauna. Our once abundant native flora, which overed large areas of countryside and proved ample habitat and foraging for wildlife, is hanging on by a thread.

Since the end of the second world war the UK has lost 97% of our wildflowers and grasslands, 40% of our heathland, 50% of our ancient woodland, 65% of our hedgerows, 75% of our actively coppiced woodland and 90% of our wetlands. The knock on effect on our invertebrates, small mammals and birds has, of course, been devastating.

So how has this happened in such a short time and where has it all gone?

The answer is that our once healthy and species rich landscape has been altered beyond recognition by the effects of industrialised agriculture. With its vast monoculture crops and deadly cocktails of pesticides, intensive farming is bringing us closer and closer to the scenario predicted by Rachel Carson over 50 years ago in her book 'Silent Spring'.  As if this is not enough, vast areas of what was once open countryside has been encroached upon by urban sprawl, motorways, industrial estates and out-of-town shopping centres.

So, what's left needs all the help it can get...NOW!

What can we do?


If we are to effect change we must work alongside local authorities and housing associations; communication and cooperation are vital.

I know what I'd like to see happen, but unless we can demonstrate to councils that introducing new management plans for roadside verges and other open spaces will save money, gain public support and increase biodiversity then it's simply not going to happen.

Unfortunately, if councils were simply to 'stop' strimming/mowing the verges, all that would happen is that most of them would revert to docks, couch grass, brambles, nettles and thistles. From my perspective this would be a vast improvement on the short grass verges that don't even offer safe havens in the form of wildlife corridors -but it would attract far too many negative comments from the general public.

Like it or not, council policies are often driven, or at least affected by a need for positive PR. If too many people complain about 'messy' verges, then the council are less likely to implement new policies in favour of increased biodiversity. Worcester City Council recently adopted a policy of leaving verges unmowed to save money and this was the unfortunate result.... http://bit.ly/oI6rCE


So, the way forward is to find evidence and examples of towns, cities and counties in the UK who have implemented new wildlife friendly policies that have proved popular with local people and which have saved local authorities money! This information needs to be shared with key people within our own local authorities; preferably those who are already sympathetic to the idea of roadside verges being full of wildflowers.  I'm going to put my energies over the next few weeks and months into finding these examples..... and then.... maybe.... I might just have a fighting chance of persuading my own local town and county councils to review their existing policies.

PLEASE SIGN THIS PETITION......    http://epetitions.direct.gov.uk/petitions/1002   to get the management of amenity grassland in the UK changed to reverse the massive decline in wild flowers. We need 100,000 by August 10th, so if you live anywhere in the UK. PLEASE SIGN UP!!!


A little glimmer of hope


I just want to end this blog, which is already far too long, with something positive......

When I spoke to our local Biodiversity Action Plan manager last week, I discovered that there is a scheme in place to address the problem of loss of biodiversity on roadside verges. It is called the 'Protected Road Verges Project'.

In this project, county councils are working together with wildlife trusts and other conservation groups to protect and manage certain roadside verges. This is how it's working in Worcestershire - http://bit.ly/nAzMNN