I've been thinking a lot about bees today... 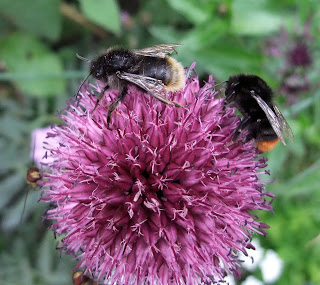 Bees are amazing!!! They pollinate a THIRD of all the food we eat, as well as half of our wild flowers. Not only do they pollinate many fruits and vegetables, but they also pollinate crops like alfalfa which are used for animal feed... so the consequences of mass bee extinction would be enormous. A world without bees is unimaginable, but the unimaginable could happen if we don't get our act together and work harder to stop the decline. We're simply not doing enough.

It's not just honey bees that are in decline; we're losing bumblebee species at an equally alarming rate and although I haven't seen any figures on declining 'solitary' bee populations I'm sure they must be suffering too.

There are numerous different reasons for the decline in honeybee and bumblebee bee populations, but two issues stand out above all others; namely 'pesticides' and 'loss of habitat'.

PESTICIDES
Pesticides kill bees.  So, we must stop using them!!!  I get incredibly frustrated when I people say things like "I'd like to stop using pesticides, but what about my roses?" We must be living in some kind of weird blinkered bubble if we believe having perfect looking roses is more important than looking after the bees that pollinate them in the first place. We really do need to start getting our priorities right before it's too late.

Bees and other insects are exposed to a whole range of pesticides and herbicides, but a new group of pesticides has appeared recently that are particularly dangerous to bees. They are called 'neonicotinoids' and they are 'systemic'. 'Systemic' means the seed is coated with the pesticide so that it infuses the whole plant. Any insect feeding on the stem, leaves, flowers or roots of the plant will ingest these pesticides that will, at the very least, cause damage to their central nervous system. At worst it will kill the unfortunate 'non target' insect. These pesticides have been restricted in many European countries... but have not yet been restricted in the UK.

This is a very complicated issue; the most up-to-date information on the pesticide/neonicotinoid issue can be found on this site -  http://www.buzzaboutbees.net/missingbees.html

I'll include more links at the bottom of this post for anyone interested in reading more generally about pesticides and how to avoid them.

LOSS OF HABITAT
Since the 1940's we have lost 97% of our UK grasslands and wildflower meadows. That's a pretty staggering loss.

Along with the meadows and grasslands we have also lost most of our hedgerows and many of the roadside verges that used to be brimming with wildflowers. This loss has had a devastating effect on bees and other wildlife.

There are many initiatives in place now to encourage farmers to increase the amount of land they set aside for wildflowers and grasses, but increasing habitat and foraging for wildlife is also something that we, as individuals, can help with. It couldn't be simpler. All we need to do is provide a few wild patches in our gardens where bees can nest and hibernate - and plant more nectar and pollen rich flowers.

The difference you can make by planting more flowers cannot be overstated. Whatever size garden you have - even if it's just a couple of window boxes - it will provide valuable and vital food sources for bees of all species.

Before I add links to sites containing information about which flowers are best for bees, I should mention that it's important to make sure you plant a selection of plants to flower in succession from early spring through to late autumn. It's also important to choose organic plants and seeds wherever possible.

Thank you so much for reading this. Bees need all the help they can get.